Everything About Gay Footballers

Your location largely impacts whether or not you’ll commonly see openly gay football players in your countries to top leagues competing for ultimate success. Mainly, we’re referring to English football, where absolutely none of the players in the top 4 leagues have come out as openly gay. While that doesn’t mean there aren’t any gay football players in England, it just means none have had the courage or felt they’d be fully supported based on their sexuality.

Not having any openly gay soccer players is a huge problem for English football, who, with the Premier League, have the most-watched league matches unmistakably around the world. If youngsters don’t see gay idols on TV playing for the big teams, of even those further down the football ladder, it’s unlikely they themselves will have the courage to stand up and be recognized out of fear their football dreams will be dashed.

While not too many openly gay soccer players exist in the top leagues internationally, some gay men have found success in their soccer careers despite the negative implications to their soccer profiles and potential hurdles that have arisen due to their sexuality and engaging in romantic relationships with other men.

These men are a credit to themselves and offer us vital hope that the big soccer teams will begin to support homosexual men more openly, providing them with the comfort and security necessary to pluck up the courage and express their true sexualities.

Here is a list of openly gay soccer players that you might know! As more players open up about their sexual preferences, this list will be updated accordingly.

Justin Fashanu was the first professional English player to reveal he was openly gay in English football and represented a selection of top English professional clubs, including Manchester City, Norwich, and West Ham prior to being transparent about his relationship preferences.

Back in 1990, Fashanu publicly admitted he was homosexual in an interview, with many negative consequences to follow for his once-promising career in football. Fashanu said he was abused on the pitch at every away match by both players and fans, with no English professional club being willing to offer him a full-time professional contract, despite his high skill level.

Thomas Hitzlsperger, the once Aston Villa midfielder who often played in the Premier League and featured heavily for Germany at the 2006 World Cup and the 2008 Euro Championships, came out as gay after retiring from soccer due to fears his career would be scuppered, which is hardly surprising. Currently, the famed German playmaker is the highest-profile former player to admit being homosexual, although he arose suspicions during his time on the field with this outlandish support of uprising gay groups.

Like most gay professional athletes at the top of their game, Robbie Rogers opted to wait until revealing his true sexuality. Robbie enjoyed a respectable playing career from 2005 – 2017, coming out as gay in 2013 and becoming the first gay man to play in the NA Pro League when he featured for LA Galaxy in May 2013. From then on, his career in Los Angeles went from strength to strength, with Robbie representing LA Galaxy an impressive 78 times before retiring. 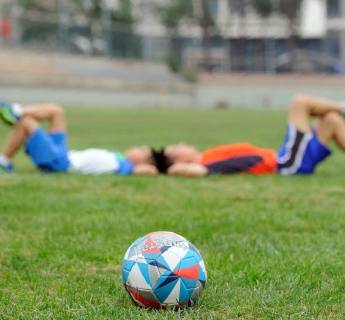 Whether the players involved in the following behaviors are really gay or not begs to be seen, but it’s easy to recount endless “gay” on-screen moments between football players whose passion for the beautiful game got the better of them a little, to say the least. Sometimes, passions boil over, and the line between men kissing men is crossed.

If we constitute guys kissing guys as gay regardless of the contextual circumstances, here are the top football gay moments we’ve seen over the years in the most prominent soccer matches, sure to induce a hit of nostalgia today!

Back in April 2010, the prestigious and viciously fought Manchester Derby had more at stake than usual. As the season reached a climax, Manchester Utd was desperate to secure the victory to not only keep their title dreams alive but to hinder City’s chances of finishing in the top 4 and qualifying for Champions League football the following season. So, this was a must-win for Utd, who were tantalizing close to Chelsea at the top of the league.

As the game reached the end, we were treated with Gary Neville planting an infamous smacker on Paul Scholes’ lips after Scholes rocketed home a delicious strike in the 93rd minute to seal the win in the Manchester Derby. This was enough for Neville to give us a lasting mental image of one of the best gay soccer moments, even though neither of them is a gay footballer, 10 years on!

The world-famous Diego Maradona and Claudio Caniggia are responsible for one of the most passionate gay on-screen kisses between straight footballers we’ve ever seen. During wild celebrations of a goal together at Boca Juniors, Maradona and Caniggia were pictured locking lips in passion as Maradona honored his pre-match bet. It was wagered that if Caniggia scored a hat-trick, Maradona would kiss him passionately on the lips. This was quickly achieved by Caniggia, who rescued the “SuperClasico” between Boca Juniors and River Plate, scoring 3 goals and guiding his team to victory at La Bombenera Stadium!

The game was extra special because River Plate were highly in-form, having just won the Copa Libertadores with Boca struggling massively, on a terrible run of 1 win from 8 matches.

Cast your mind back to when Italy’s Fabio Cannavaro kissed his teammate Gianluigi Buffon after their World Cup win in 2006 over Ukraine in the quarter-final. It was clear to see that the moment meant a lot to both men whose passion and love for their country is instilled deep within them, which lead to a keen on-field embrace captured on hundreds of cameras around the ground. Although none of them are gay soccer players, and they both have long-term relationships with women, it’s a great gay soccer moment nonetheless.

Although we’ve seen huge advancements in the way gay men are treated in society across the world, the football world still lacks behind massively. This is clear to see with the minority representation of gay soccer clubs; in fact, up until recently, it was hard to find any top club showing support for gay men or players.

However, with the rise of the internet and instant communication online services, clubs and groups have been developed to help gay players find supportive clubs as well as many gay rights associations being formed to tackle the usual homosexual discrimination in football.

First established back in 1991, Stonewall FC was the first all-gay male soccer team playing competitive football. It all started with a dream of like-minded people playing together without discrimination, and it’s now birthed three 11 aside teams regularly competing amongst the winners! A Stonewall FC outfit has reached the final of every LGBTQ+ soccer tournament they’ve entered since 2000!

With a steady determination and never say die attitude, Stonewall FC are causing waves in the gay soccer world and causing a ripple effect, with other all-gay clubs forming as a result of their unbelievable rise to stardom!

Based in Scotland, HotScots FC were the first LGBTQ+ friendly soccer club in Scotland. What places this outfit in a category of their own is a desire to not only win on the pitch but to assist in diminishing the barriers between the LGBTQ+ community and the mainstream football world.

HotScots FC first met resistance from people in the wider Scottish football community who weren’t accepting of their aims and values, but these have been largely evaporated due to the rise of social media and the none tolerance of homophobia online. Their camaraderie has led to them making international tours to Europe as well as traveling thousands of miles to compete at the highest level in LGBTQ+ soccer tournaments.

The widespread homophobia in football does not exclude the football officials looking to enforce the rules of the game. Referees are particularly heavily scrutinized based on their sexuality, particularly by fans and players on the pitch. It’s not uncommon for sets of fans to begin chanting and screaming abuse at gay referees, leading to only a minority of gay men trying to officiate football matches at any level.

Many players and fans don’t value the opinion and authority of a gay guy on the pitch, making it especially difficult for openly gay officials to have notable success! However, despite the apparent challenges faced by gay officials, some men have booked the trend and have enjoyed success in football as gay referees.

Jorge burst onto the scene way back in the 1980s as a gay referee in Brazil with his flamboyant style, tolerant of no-nonsense on the field. It’s certain that Jorge was seen as an inspiration and idol of many upcoming referees, not only in Brazil but all over the world.

Rising up the ranks from a very young age despite his sexuality, Jorge began to referee more prestigious matches, gaining the respect of players, staff, and people alike. However, his meteoric rise wasn’t without a hiccup; he was regularly the victim of homophobic abuse while officiating games, as seen in a match between Flamengo and Volta Redonda, but the hardened Jorge took it all in his stride, never letting malicious comments or statements affect his performances!

As times continue to advance, the way gay footballers are viewed and treated is likely to improve. However, we should expect slow progress due to what we’ve seen over the past 20 years!

Big changes happen one step at a time!

Have you enjoyed this article on gay soccer players, referees, and gay-friendly soccer teams? If so, why not check out more similar content now on our platform?

Does Being Gay Affects a Guy’s Soccer Career?

Yes, being homosexual is certain to negatively impact a player’s career, with many professional clubs making it very hard for gay men to receive long-term contracts or even be scouted at a younger age if they’re gay. Until changes are implemented, this is unlikely to change.

Why Is Abuse in Soccer for Gay Men so Prevalent?

Simply put, most men see soccer as a masculine game without room for intrusion by effeminate guys. As such, this leads to many men shunning the advances of great gay footballers, despite their ability. As soccer is such a closed world for homosexuals, abuse is rife.

Is It Worth Hiding My Sexuality if I Want to Make It Professional?

Maybe, unless things change drastically in the next 5 years, we’d recommend keeping your sexuality out of the public eye, particularly if you’re homosexual. While this is morally wrong, industry practices make it difficult for gay men to reach the top of the calendar.

How Many Gay Men Play in The English Premier League?

Currently, no players playing in the EPL have expressed that they are homosexual. Many men fear the negative implications that being gay poses to their careers. However, it has been rumored that some pros in the English league are gay, without any definite names thrown into the mix.

Do Gay Soccer Players Get Changed in Men’s Changing Rooms?

Yes, gay soccer players get changed in the same location as other men unless members of the team express a desire for this to change. Currently, opinions are mixed, with some men allowing same-room changing for gay guys, with others feeling uncomfortable at the idea.

Can I Be Gay and Reach the Highest Level in Soccer?

Largely, this depends on your location. Places like the USA are much more accepting of gay soccer stars than places like England. It seems old cultures are still very prevalent. It’s best to concentrate your efforts on relocation to a more gay-friendly location, if feasible.

# MusicHow Many LGBTQ+ Rappers Do You Know in the Community?

# CelebritiesOnce and for All: Is Scott Hoying Gay?

# CelebritiesAll About the Hottest Gay Male Celebrities
You may also like:

# MusicGay British Singers You Never Knew Existed but AroundMen Does