Hot Gay Men of the Present-Day

In today’s day and age, there are more openly gay men than ever have been before, particularly those who’ve achieved celebrity status. In the past, being homosexual was largely frowned upon across most societies, leading to men who are attracted to other men being afraid to express their sexuality openly.

Opposing, with the societal trends of the 21st-century shifting massively, people in today’s modern day and age are far more open and accepting of gay men, leading to a much larger proportion of guys coming out of the closet with their sexual desires. From famed actors to professional sports stars, we don’t have to look far these days to find a gay guy in the spotlight!

In today’s article, we will cover the hottest famous gay men so the argument can be settled once and for all!

Seeing gay men in the limelight is much more common than it was in the past. Granted that back in the 80s or 90s, there were gay actors doing well in the industry; however, this is nothing compared to what we see now!

Whether it be down to the changing views of the younger generation or the sheer force of the endless LGBTQ+ communities that are always supporting the cause, it’s clear to see that being gay isn’t a negative aspect involved when searching for work in Hollywood and on leading film sets across the world. Directors these days have no preference over an actors’ sexuality, promoting much more equality and diverse representations of different sexualities.

Here is a list of the hottest gay men we see on TV today!

Wentworth Miller shot to fame most notably for his relatively recent role in “Prison Break,” the world-famous Netflix original that had us all gripped to our seats. Playing Michael Schofield, Wentworth gripped our hearts with frantic episodes trying to free both himself and his brother from serving a life sentence from prison. Although he first denied being gay back in early 2007, since more famous faces have come out in recent times, so too has Wentworth Miller.

Actor, singer, comedian. Neil Patrick Harris can hold his head very high for what he has achieved so far in his short life. At just 48, Neil has figured in many household names across the years, most notably “How I Met Your Mother,” where he gifted us endless laughs. Back in 2014, Neil married his then-boyfriend David Burtka, with whom he’d been in an intimate relationship previously. Although Neil is now gay, he didn’t always identify this way and currently has two children from a previous relationship.

Born in Pittsburg in June 1977, Zachary knew what it was like to be on the brunt of bullying as a child. Having always felt different from his male counterparts, preferring to associate with the girls are a young age as opposed to boys, other boys poked fun at Zachary. In those times, it didn’t help his cause that he had a huge interest in drama and acting. Luckily, Zachary shrugged off the bullying over his sexuality and has racked up an impressive 10 prestigious acting awards and a further 27 nominations. Not bad going!

During his 42 years on earth, Luke McFarlane has embraced sexuality openly and has never been afraid to express who he is. At 6”2’, Luke stands tall and deals with negative influences swiftly, removing them from his life and embracing positivity. Luke is now in a serious relationship with the aforementioned Wentworth Miller, having met at an awards ceremony in 2019 and then kindling their romance over flirty lockdown text messages. Hopefully, things work out, and they settle down for the long haul in marriage. What a fantastic couple!

Cheyenne was born July 12, 1975, in Washington and has been openly gay since a young age. Growing up, Cheyenne knew he had a passion for acting, often prioritizing this over everything less, even his friendships. Fortunately, Cheyenne has gone on to achieve great things, starring in numerous Hit shows such as “American Horror Story” and “Glee.” Back in 2014, Cheyenne married Jason Landau, and they now have adopted two children together!

No top 10 list of gay men would be complete without the legendary Chris Salvatore, one of the sexiest gay men to grace our screens! Christopher grew up in a small town just outside of Philadelphia, where his passion for being in the spotlight was discovered. He took his learning to the next level when he studied dramatic arts at TNYC after going to college. It was during this time Chris experienced a change in sexuality, realizing he preferred dating men rather than women.

Whether you know him from his time acting in Arrow, Torchwood, or any other of his hit shows, it’s certainly difficult to have made it this far through life not knowing who John Barrowman is. Not to mention he is an impressive stint in the “I’m A Celebrity: Jungle Challenge,” where he further captured the hearts of fans with his loving and kind nature. John is an active member of the LGBTQ+ community and has achieved awards for his service, even going as far as being fired from a role for not hiding his sexuality!

The Welsh heartthrob born in Pontypool is very open about his sexuality and desire for men, although he remains private with his partners and keeps his relationships out of the public eye. Luke took the leading role in many western musicals, so he is used to having all eyes on him. Luke was openly gay before many other famous faces we see today.

Most known for his role in “Sex and the City 2,” Matthew is a gay actor/director who’s never shied away from his sexuality. At 41, he’s seen his fair share of ups and downs in relationships; however, he’s not yet settled down and currently enjoys playing the single field. So guys, you never know, there’s always a chance you could bag this beautiful man!

Since way back in 2011, Matt has been happily married to Simon Halls, who helped guide Matthew through endless onscreen appearances in blockbuster films and TV series. Most of all, Matthew is known for his time in “Chuck,” his starring role in the film “In Time” and “The Texas Chainsaw Massacre.” Both in a diverse portfolio of different areas of acting expertise, we’re happy to see Matt return to our screens time and time again!

If you have a better idea of people who you think should be on the list of the hottest gay actors, feel free to send us your personal recommendations you feel are worthy of making the cut! 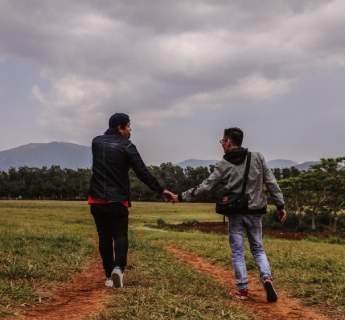 What Proportion of Gay Men?

Across all ages, 9% of men have engaged in some sort of sexual activity with another man; however, the number of men identifying as gay is significantly less. While it’s hard to gauge an exact figure, around 2% of all men now identify as homosexual, but this number is always increasing year on year.

Is It More Difficult for Gay Men to Land Acting Roles?

In the past, yes. However, today it is much easier for gay men to land acting roles, as the stigma around being gay has largely dissolved. As such, straight men and gay men each have similar opportunities when it comes to looking for work in the industry.

Yes, undoubtedly, celebrities today are far more comfortable opening up in regards to their sexuality. It’s easy to see with the huge proportion of gay men on screen. It’s hardly irregular to see gay men in leading acting roles.

Does Being Gay Affect How Men Are Treated?

Certainly, although most people are unbothered by a person’s sexuality, a minority of people within society with outdated, immature mindsets still treat gay men differently from straight men. The changes in overall societal mentality show that gay men being treated differently will be tolerated less and less.

Why Are Gay Men Scared to Open Up?

The stigma attached to being gay can still be observed, particularly in the older generations who are less adaptive thinkers than people of a younger age. This leads to some guys being afraid to open up and address their sexuality, with some men even going as far as spending their lives in relationships with women.

Why Is the Number of Gay Men Rising Worldwide?

As guys feel more confident to divulge their sexuality openly, more men can be true to who they are without fear of scrutiny from people in their lives and the wider general population; this naturally leads us to see an increase in the number of gay men we see. There’s no more reason for gay men to hide their sexuality.

# MusicFind a Gay Metal Band near You with AroundMen
You may also like:

# MusicGay British Singers You Never Knew Existed but AroundMen Does