Created by Seth Macfarlane, Family Guy is an all-American cartoon show depicting a family consisting of two teenagers, a baby, and a dog, and the things they get up to. Since the first episode premiered back in January 1999, Family Guy has become a global hit with audiences around the world, primarily in the USA, where the shows originated.

Family guy predominantly portrays the life of the main character, Peter Griffin, as he lives his daily life tackling all manner of real-world issues, with the overall objective of the show being to enrich the lives of people through humor.

Naturally, Family Guy decided to implement some gay characters into their line-up so people could better relate to the cast and enjoy more personalized fun gay jokes as a result.

When adding gay characters to the line-up, Seth Macfarlane opted to create multiple gay characters that he could use in the show. Adding gay characters allow the production team to tailor more jokes into the script, as the American public finds this type of humor more amusing than most places. Without gay characters providing the relevant platform to base jokes, the show would’ve been seen as having malicious intent rather than providing entertainment to its viewers as intended.

Although some characters were added after a few seasons of the show, most in the list below are original members of the cast.

In Family Guy, Stewie is the 1 y/o child of Peter Griffin, who is flamboyant and boisterous in everything he does. Despite being so young, Stewie is hell-bent on killing his mother, who always tries to find him girlfriends and female companions. In one episode, it became clear why Stewie has such a passionate hatred for his mother, simply due to her labeling as heterosexual.

When speaking about Stewie, Seth said they often write his lines as if he were an out-and-out gay character. However, as Stewie is of infantile age, it’s impossible to truly assume his sexuality until he gets older.

Often referred to as “Herbert,” John Silverbird is one of the gayest characters in Family Guy. The retired serviceman is exclusively attracted to younger boys. The cartoon portrays Herbert as the local pedophile. Throughout the show, we learn that Herbert is most attracted to Chris, Peter Griffin’s son.

During his time on-screen, Herbert is often not seen without his dog, Jesse, who is similarly very old and seen a lot in Quahog throughout the 20+ years of production. The damage to his profile was done in his first appearance in “To Love and Die in Dixie,” when he proclaimed his love for Chris and was seen as a pervert ever since.

Bruce is the only out-and-out gay guy in Family Guy, not being afraid to express his desire to have sex with men and engage in sexual activity, as regularly seen in episodes. Bruce was a rare extra character in Family Guy for the duration of the first 3 seasons of production but has become a prominent feature since the show came back on-screen amidst being canceled.

Seth MacFarlane confirmed Bruce’s love for guys during an interview with “The Backlot,” expressing that Bruce is the positive depiction of a gay stereotype. In another episode, Meg finds intimate pictures from a male on Bruce’s phone, leading her to terminate their would-be marriage before things get too far along.

In the episode, Hartman is happy to receive documentation confirming his name change to that of his male partner. His name would become Ramirez, as such, confirming what we all thought. Dr. Elmer Hartman was gay all along. Who would’ve guessed?

Although Peter Griffin is a straight character in Family Guy, some scenes in certain episodes have left fans wondering whether Peter has an attraction to men. Not to mention consistent running jokes seen on the show all relating to Peter being a homosexual.

The Family Guy gay episode (Series 7, Episode 8) shows us a time when Peter is strapped for cash and pursuing new avenues of earning capital for the family. The episode shows Peter participate in medical trials, which results in him being injected with “the gay gene,” turning Peter into a homosexual.

The episode perfectly highlights that sexuality is not a choice, hence the huge disconnect. 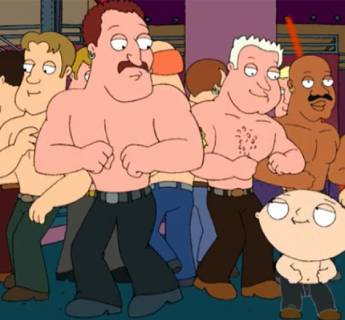 Across the show’s episode production, a slight number of gay sex events were seen in Family Guy, although more were originally cast. Fox and Netflix decided that some episodes were too graphic to publish, so the “softer” scenes were the only ones to make the cut; this also happened with a number of gay jokes and songs, which were also edited out of production.

In “The Giggity Wife,” Quagmire lands himself a new prospective life partner but soon has a change of heart about spending the rest of his days with a prostitute. So, he and Peter concoct the plan to tell his newfound wife of Quagmire’s homosexuality. However, his “wife,” smelling lies, decided to put the two of them to the test. To prove they’re truly actively gay men, Charmisse says Peter and Quagmire must engage in gay sex; otherwise, the lie is out.

As Peter and Quagmire begin to reluctantly passionately embrace, Charmisse encourages them to take things further. As they both strip down to their underwear and are ready to finally engage in sexual intercourse, Charmisse orders them to stop as she’s seen enough to believe they’re gay.

The Family Guy show is no stranger to implementing funny, witty, and downright ruthless gay jokes for their audience. The creators are much less focused on pleasing the “snowflakes” of the 21st century than companies such as Netflix, Fox, and Amazon Prime.

The gay jokes cast into production are often edited out, not making their way to the platforms the show is watched on, largely to the dismay of Seth MacFarlane, whose sense of humor is the reason for the success of the show. Unfortunately, fans of Family Guy are unable to see most of the removed jokes, with their presence going unnoticed without additional research or knowledge.

As times changed and more and more historic sexual offenses came to light from the past, Family Guy decided to change their stance on resorting to gay jokes to provide humor. Instead, exploring other avenues to entertain their audience.

It doesn’t take many viewings to begin to see gay moments in Family Guy, all of which were purposely created by Seth Macfarlane to portray gay stereotypes and communicate a desired message to the audience.

During episode production, the writers successfully managed to offend all groups of people with their blanket approach to humor. Nobody is immune to being the butt of the joke at one point. From gay guys to black men, to Chinese women and white children, there’s no safe area for fans of Family Guy.

After reading this article, you now have all the information relating to the culture of the show you were looking for. If you’re looking for answers to our most prominent questions, check out the FAQ section below!

How Many Family Guy Characters Are Gay?

There is only one openly gay character in Family Guy, Bruce. Bruce is the only official gay character on the show originally. However, some characters evolve throughout production and see a change in sexuality. Characters like Dr. Hartman and Herbert become gay later down the line.

No, Peter Griffin is a straight man in Family Guy. The only time Peter Griffin became gay was temporarily, and he had valid reasons; this was when he was pursuing ways of earning money. Although gay jokes aimed at Peter are common, Peter is not gay.

How Can Stewie Be Gay in Family Guy?

Although Stewie is only 1 year old, he’s very interested in exploring his sexuality and hates his mum introducing him to new “girlfriends.” In one Ep, Lois refers to Stewie as heterosexual, leading him to go into a fit of rage. This behavior elaborates that Stewie isn’t straight, irrespective of his age.

Why Did Family Guy Have so Many Gay Jokes?

Up until 2019, Family Guy heavily featured gay jokes as a method of engaging their audience. Mainly, fans found gay jokes on the show humorous rather than malicious. But, as time passed, audiences grew tired of homophobic jokes, leading to Seth changing his approach and joke style.

How Long Has Family Guy Been in Production?

The first Family Guy episode was broadcast on January 31st, 1999; however, it was created largely in 1998. Now, over 20 years later, the show is still going strong, with new episodes still being created amusing a worldwide audience.

Why Are Gay Men Necessary in Family Guy?

Gay men are required for the smooth running of the show for two main reasons. Firstly, including gay men makes the cartoon more relatable to audiences and provides a meaningful avenue to previously implement gay jokes in the show in a way not seen as offensive to fans.

# MusicA Guide to All the Best Gay Singers Just for You

# MusicHow Many LGBTQ+ Rappers Do You Know in the Community?
You may also like:

# CelebritiesOnce and for All: Is Scott Hoying Gay?